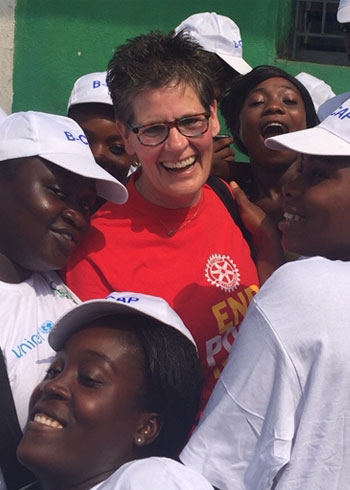 Mary Beth is the founder and President of Ryan Signs, Inc., in Madison, Wisconsin, USA. She is a non-lawyer Fee Arbitrator and a (past) non-lawyer member of the Client Security Fund of the State Bar of Wisconsin. Mary Beth is a supporter of the What If? Foundation, which works to feed and educate children in Haiti.

Mary Beth Growney Selene has been a member of the Rotary Club of Madison West Towne-Middleton, WI, USA since 1987 and she served her club as President in 1993-1994. She has been a host parent to four Rotary Youth Exchange students.

In her District 6250 she served as Governor in 2000-2001; District Membership Chair and District Rotary Foundation Chair.

Mary Beth served as a Training Leader at the International Assembly in San Diego and was the District 6250 Representative to the Council on Legislation in 2004, 2007 and 2010.

She has received Rotary International’s Service Above Self Award and The Rotary Foundation’s Citation for Meritorious Service.

Mary Beth and Alan are Major Donors and Bequest Society members to The Rotary Foundation’s Endowment Fund and they are both Sustaining members to the Annual Fund.